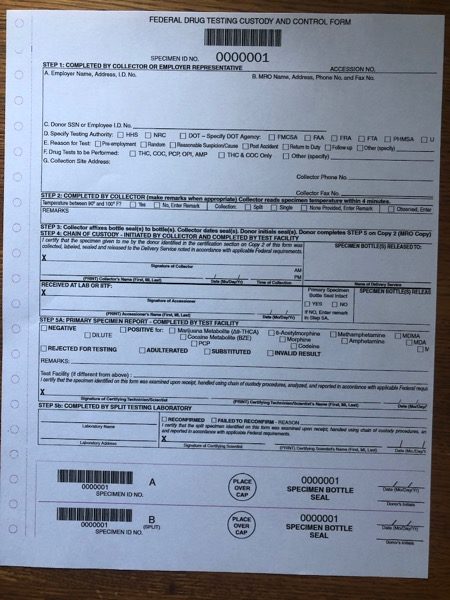 A chain of custody form, or CCF, is a document used to keep track of a specimen in the drug testing process. It tracks the specimen from the moment the donor provides the specimen to the collector until the reporting of the specimen analysis from the MRO to the DER.

The purpose of the chain of custody form is to ensure that the specimen is handled in accordance with the Mandatory Guidelines for Federal Workplace Drug Testing Programs. These guidelines lay out the drug testing rules in detail, and the CCF ensures that each step of the testing process is conducted and documented correctly.

Also, with the CCF, MRO’s, labs, collectors, employers, and even donors can find flaws in the testing process that otherwise might have gone unnoticed. They then can correct the mistake or cancel the test. In so doing, they can prevent false positives.

The chain of custody form helps everyone in the testing process identify and correct issues that may occur. As a result, it helps employers and DERs identify problems that could otherwise lead to enforcement action taken against them by a DOT agency, in the case of DOT testing.

Ultimately, the responsibility for any mistake made in the testing process falls on the employer. It does not matter whether a hired service agent was responsible for the error.

It is for this reason that, at least in DOT drug testing, the employer has a copy of the chain of custody form. Assuming the employer has a knowledgeable DER, they can thoroughly review the CCF for any errors. We will discuss the errors that the CCF can indicate shortly.

Also, for more information on the DER’s roles and responsibilities, check out our post covering the six main roles of the DER. It provides a good primer on the designated employer representative job title.

The Federal Chain of Custody Form

The federal chain of custody form is used for DOT drug testing. It has five copies or parts. Each part is used by a different party involved in the testing process.

Throughout each step, the person handling the specimen documents their actions in regard to the specimen.

As mentioned, each party is provided their own copy of the chain of custody form:

The collector obtains a specimen from the donor, following the necessary steps and documenting them on the CCF.

They then correct any flaws, if possible; if not, then they reject the specimen for testing. Once corrected, though, they test the specimen.

After testing, they send their results along with a completed Copy 1 of the CCF to the MRO. The MRO then reviews the CCF for errors, investigates any potential issues or flaws, and verifies the lab result. If the MRO finds errors that cannot be fixed, they must cancel the test.

The MRO then interviews the donor and sends the verified results to the employer.

The CCF provides a paper trail of the collection, analysis, verification, and receipt of test results. At each step, this paper trail is reviewed for potential errors.

Can a DOT Testing Form be Used in a Non-DOT Test?

That being said, in certain instances a collector may use a non-DOT form for a DOT test. An example of those certain instances would be a post-accident test or reasonable suspicion test where there is not enough time to get a federal CCF.

Under these circumstances, though rare, the DOT views this as a “correctable flaw.” The MRO just has to follow a few steps to fix it.

Errors on a DOT Chain of Custody Form

So you understand what a chain of custody form is as well as its purpose. But how does it actually work to catch mistakes in the testing process?

There are four kinds of errors, or “flaws,” that a federal CCF may reveal. They are as follows:

Correctable Flaws Related to the CCF

Correctable flaws are flaws in the testing process that must be corrected. Otherwise, the drug test must be cancelled.

For labs, there is one correctable flaw: if a collector’s signature is omitted on the certifying statement of the chain of custody form. In this instance, the lab must receive written documentation from the collector that the information on the CCF is accurate.

For MROs, there are three possible correctable flaws, all related to the CCF. They are:

If the collector catches these first two CCF correctable flaws, they must attempt to correct them as soon as possible.

If another entity catches the flaw later in the process, they must get written confirmation from the collector confirming that the CCF info is accurate. The collector must also explain why the mistake occurred.

If the collector used a non-DOT form, then they must provide a signed memorandum explaining why they had to use that form.

The MRO must then maintain this documentation of flaws with the CCF.

“Fatal Flaws” Related to the CCF

A “fatal flaw” is an error that cannot be corrected and always results in a cancelled test. There are five fatal flaws related to the CCF:

If any of these flaws occur, the lab must reject the specimen for testing, and the MRO must cancel the test.

There are other fatal flaws not directly connected to the chain of custody form but rather to the specimen itself. They are as follows:

There is one of these such flaws:

Just as with the use of a non-federal form for a DOT test, the MRO must receive a signed memo from the collector explaining why the error occurred as well as what is going to be done to ensure that it does not happen again.

This particular mistake can lead to enforcement action against the employer and/or service agent.

Some administrative and clerical errors on the CCF do not require correcting, and they do not cause the MRO to cancel the test. Examples of these mistakes are:

While these mistakes do not require correction and won’t cause the cancellation of a test, they may result in enforcement action against the employer and/or service agent.

Many of these mistakes involve the omission of documentation on the CCF. In these instances, these omissions may indicate some sort of tampering or mishandling of the testing process.

For this reason, the MRO, lab, and collector all must work to address them. They must verify that the testing process outside of the documentation failure has held up to the drug testing guidelines and 49 CFR Part 40 (for DOT tests).

The chain of custody and control form is an important piece of the drug testing process. It provides documentation of the actions involved and helps all parties ensure that each donor has a fair test.

Now a question for you: have you ever found one of these flaws on a CCF before? We’d like to hear your experiences with the chain of custody form and the drug testing process. Let us know in the comments section below.